‘Just allowing them to be submissive doesn’t always allow for the more drastic shift in the framework and thinking that I want. So I have to bring in my girls, like Audre Lorde and Patricia Hill Collins, and make these men actually read about black feminism,’ she said 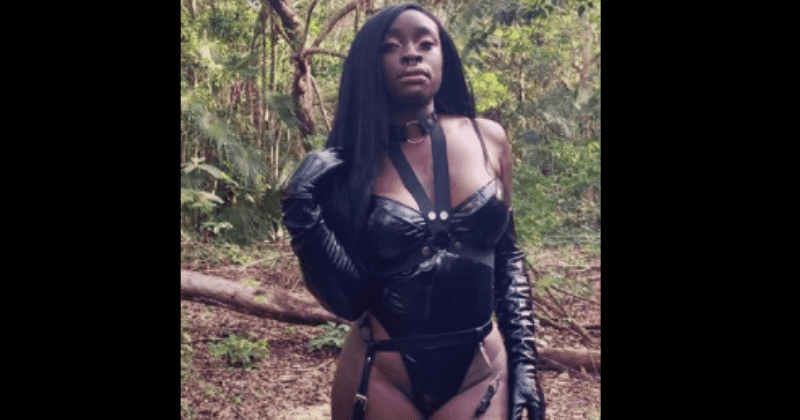 Mistress Velvet’s death was announced on May 9. The Chicago-based master’s graduate was 33 (Instagram/missvchicago)

The post called Mistress Velvet “an icon” as it continued, “Their life as an African Feminist and Revolutionary Communist brings us closer to Their fierce vision of SW and Trans Liberation. Velvet, your presence in this world makes us better. Thank you for showing up unapologetically. We are all at a loss. We now honor Them by decriminalizing SW, demanding reparations, and fighting for Black Liberation. We know you’ll join us. Friends, lovers, admirers: share your memories of Velvet and how They inspired and challenged you to move through the world differently. A memorial service will be held at a date to be announced. With love, grief, and hope, Comrades of Mistress Velvet.”

The Sex Workers Outreach Project, also known as SWOP-USA, also took to Twitter to pay their tribute to the Chicago-based master’s graduate. The tweet stated, “We are heartbroken to learn that one of our Executive Directors has passed away. We will post memorial details when they become available.”

Who was Mistress Velvet?

They added at the time: “Just allowing them to be submissive doesn’t always allow for the more drastic shift in the framework and thinking that I want. So I have to bring in my girls, like Audre Lorde and Patricia Hill Collins, and make these men actually read about black feminism. Then, it’s moving from them simply fetishizing black women, to realizing: This is a systemic issue I’m contributing to by the virtue of being a white man and being rich.”

Meanwhile, as the news of Mistress Velvet’s death spread, social media was flooded with tributes and love for them. One user tweeted, “This is horrible news! I met her on the EXPO floor at Chicago EXXXOTICA & we had a quick photo shoot & later another shoot in my suite. Velvet was an incredible person. I’m heartbroken over her passing & thankful that I met her & had the opportunity to spend time in her presence!” Another user noted, “Your brave work helped me start mine @MissVChicago thank you for being.” “I don’t want to be a white girl making this about me, so here is a master thread of the beautiful human we have lost in Mistress Velvet. If you are unfamiliar with their work, you owe it to yourself and your peers to have a look. They were and are an inspiration,” a tweet added.